On a recent trip into the depths of the earth, I had the opportunity to discover the world beneath our feet. Since that experience, I have been driven to recreate the natural subterranean phenomena into a phantasmagorical environment. The other worldly stalactites and stalagmites, the glowing pools, and the expansive glittering walls have lent themselves to the pellucid (def. pellucid: “beyond light, beyond consciousness”) of my imagination. I began the investigatory process by peeling the skin off a mica rock and sewing it, alternately, to a butterfly wing or a scrap of trash, treating each with equal reverence. Together, the parts transform the space; an undulating sea of multicolored scales moving around the viewer. The fields of color merge both the discarded refuse and the coveted butterfly wings. I have taken mica out of the ground, transformed, and then reinserted it into my own representation of a cave. The culminating effect is a prismatic noctilucent environment.

The cave is a powerful symbol of refuge; a place of both power and danger. As one moves deeper into the darkness of the earth’s interior, one can more easily encounter things shadowy and risky, even death itself. The cave is a place of magical incubation and alchemical transformation. In fairy tales, legends, and history, the cave is often inhabited by threatening creatures, but it is also a place where heroines and heroes meet their own allies, or their own self. While the forces within may be dark, they hold great power and represent the unconscious forces we may have repressed or hidden. Although we are entering potentially dangerous and unfamiliar territory, we still choose to enter caves to get to the core of our nature and our power.

Cultures, past and present, have recognized the aesthetic, practical, and technological uses inherent in mica. I am intrigued by it’s versatility and the dichotomy between the transparent and protective nature of the mica, the way it acts like a lens and a shield. In our dangerous era and the time of reckoning for many species, the idea that a mineral can act as a protective agent for a delicate creature is invaluable.
The butterflies in Pellucid come from butterfly farms. These farms have not only increased butterfly populations, but have also provided an alternate industry to the devastation of the primary rainforests. Besides having a short lifespan, butterflies require the same type of tropical climate, don’t take up much real estate, and can provide a steady livelihood.
Psyche, the Greek word for butterfly, is the same word for soul. A butterfly wing is made of tiny solar panels; colorful scales of iridescent dust tipping automatically in the sunlight. The wings in Pellucid are held still in a protective layer of mica, a transparent veil of rock, strong and fragile, revealing and concealing simultaneously. To create a tension between the exterior and the interior surfaces, I formed the cave, from rock salt, into a large monolithic chunk of white rock. The rock salt is also suggestive of the essential relationship between the earth and the fluid coursing through our veins. By depositing this into the pristine environment of a museum, the exterior becomes juxtaposed with the intricate detail embedded on the colorful interior.

By enclosing butterfly wings inside mica, I have created a magnified version of the minute scales. My work reveals what the human eye sees in fleeting transitory moments…A sustained complete vision; a powerful vibration of color. 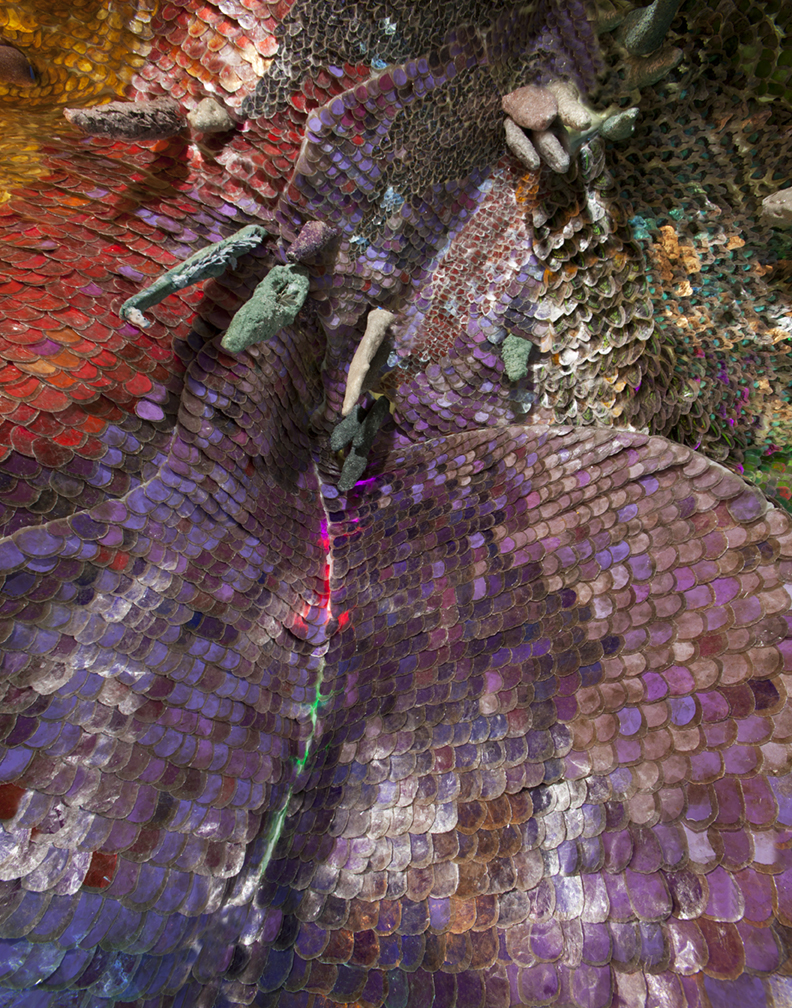 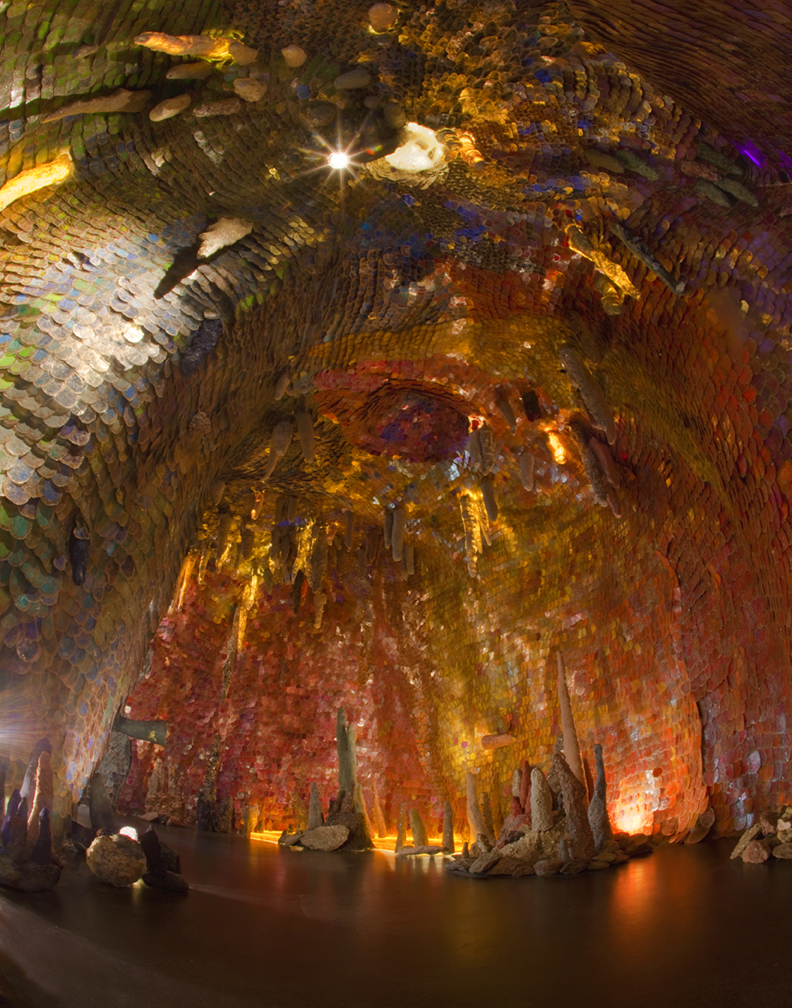 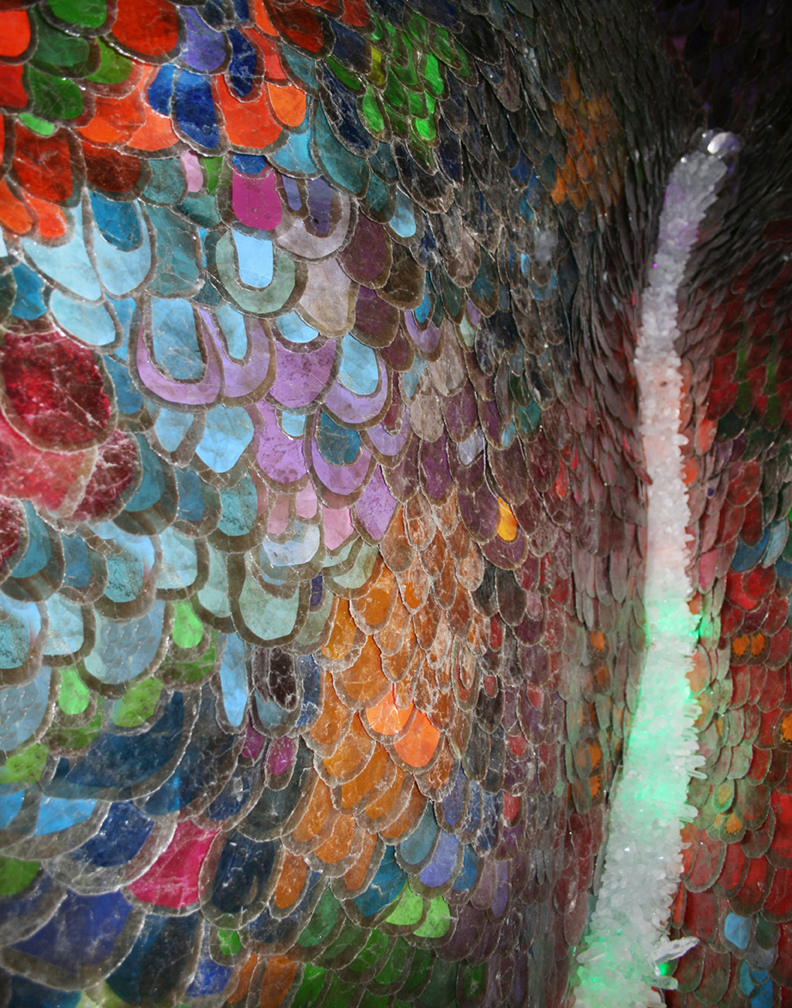 I woke up and found myself sewing a stone to a wing,
preserving the dust of a butterfly from a dangerous era,
binding the garbage to the unconscious mind.
Clandestine rites conducted inside the earth,
beyond light, beyond perception,
where any magical incubation is possible.
A geological descent
through a never-ending rain of points
Minerals, the bones of the earth,
hidden flowers that crawl through underground gardens,
a faceted forest of gemstones,
growing drop by drop,
an abyss of maniacal decorations
that gropes through millennium after millennium
with the devotion of rainwater, the mastery of ocean waves,
the hot blunt force of lava
and the love of deadly dissolving bacteria.
The phantasmagorical insides of the earth,
a dream turned inside out, revealed in perverse form,
the drip drip of time leaking through a spire of stone,
Entertaining a premonition of a speleological party,
an underground extravaganza,
where paradise is defined as a mother’s womb
and birth is inevitable.
A fortuitous encounter with a rock
Other worldly subterranean chamber,
My skin, suddenly a sparkling dress of mica. 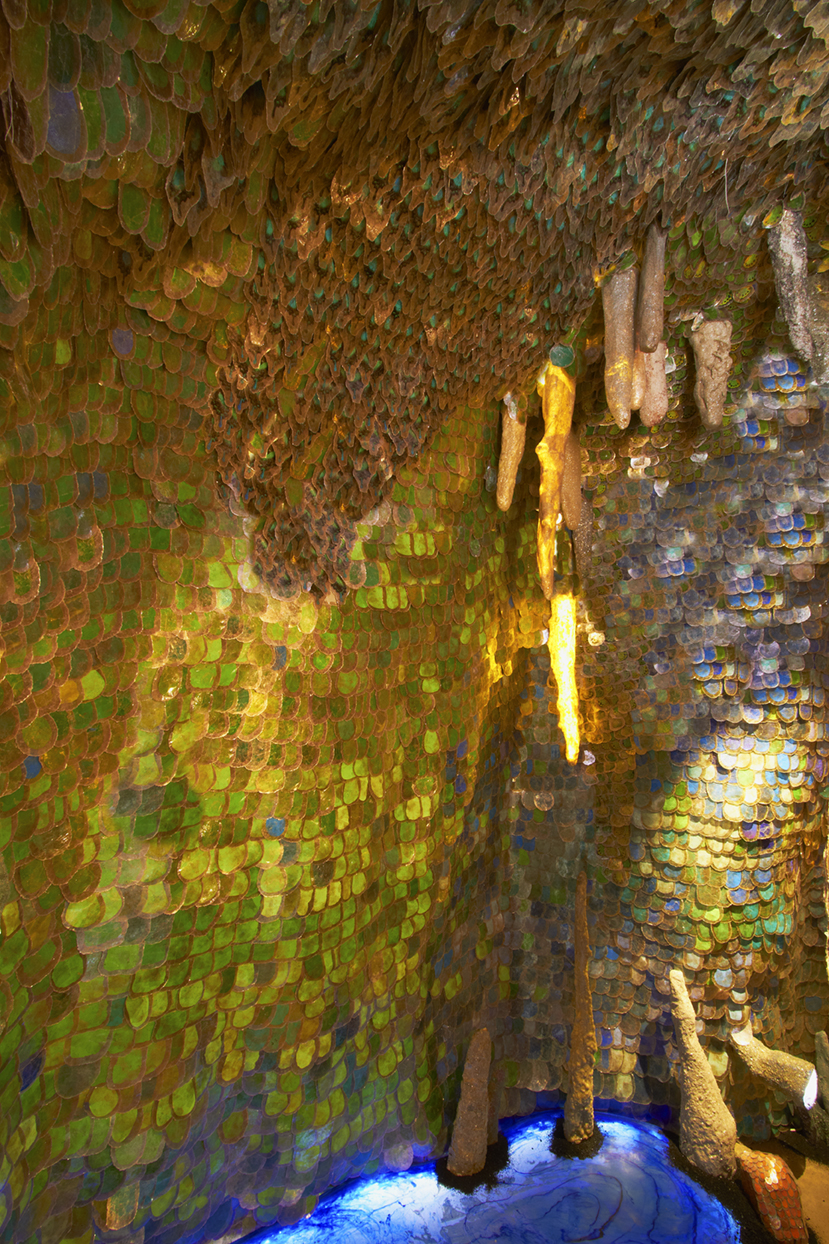 Couple became engaged in Pellucid while on view at the Museum of Contemporary Art in Denver, Co.